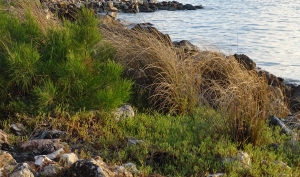 As many of you know, I have a cold and yesterday morning I woke up about 2:30 from my own coughing. I was unable to get back to sleep even though I knew it was going to be a very busy day. So I spent the next couple of hours working on paperwork for stuff at school. I had hoped I would get sleepy but that didn’t happen. At 5:00 I began my usual morning walk along the sea, all the time aware that I had to be ready to go a little earlier than usual. 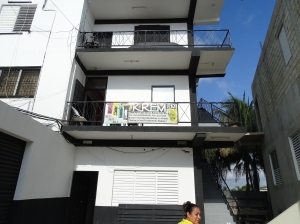 Following the morning walk there was a quick shave and shower and at 7:20 Ms Candi and I were headed off to the KREM TV station.

We have been using a computer assisted language program provided by Restore Belize and we have had some pretty good success with it so Ms Candi was invited to the morning show to do an interview, along with three other people, about the program.

We waited only a few minutes

before Ms Candi and the other interviewees were put at the desk and were “miked up.” The interview lasted about 15 minutes. Ms Candi handled herself like a real pro.

Egbert in the computer lab

Luckily I had a few photos of our students working in the computer lab on the language program. The photos were on my computer and I was able to quickly transfer them to a flash drive so they could be shown on the screen at various times during the interview. 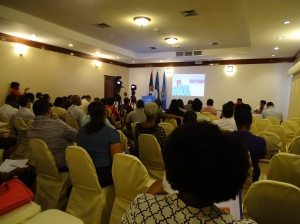 Immediately following the interview we proceeded to a presentation at the Biltmore Hotel for world health day. The conversation was about diabetes prevention. There were several people who presented. Most of them read their powerpoint presentations. I quickly get bored by people who put up powerpoint slides and them read them to the audience and my lack of sleep overnight was catching up with me.  I may have napped a little.

Ms Candi asked that we return to school for a little while before proceeding to the next meeting of the day.  We returned to school and she spent a little time changing her presentation for the afternoon workshop–so she would not be reading her powerpoint slides.

Ms Candi was great in the afternoon presentation.

By 1:00 we were in a another meeting where Ms Candi was one of the presenters. It was also about the computer assisted language program.  Ms Candi did very well. She was scheduled for 10 minutes and used 9. She gave a good plug for Friends School and one of the people at the head table picked up an application for our Adult school to give to an acquaintance of hers.  (woohoo)

At this program a couple from Jamaica were the featured speakers. They had used the program successfully in Jamiaca (and were more than 50 miles from home–you know that old joke, right?), so they were brought in as the experts.  They were actually quite good.

At the end of that presentation, I had to know. I went up to speak with the Jamaican presenters and after a few other people finished speaking with them I asked, “Do you know any Quakers in Jamaica?”

They both said “no” and then the wife, Ms Norma, said, “But my sister went to Highgate  to school.” I was pleased to hear that and we visited a bit about my visit to Jamaica with the FUM board.

By then it was 4:00.  I had promised the students that we would practice shot and disc after school but school lets out at 3:30 so I really didn’t expect any of them to still be there when we returned. But no, there were 6 young men just waiting for us to go to practice. We practiced for about an hour and then delivered the boys near their homes.

By the time I got home, made some dinner and had a chance to eat while watching the update on the Masters golf tournament, it was 8:15. Close enough. I went to bed–and slept until 4:50 this morning.

Blessings to you all.