The 4-H Youth Development Center runs a program like ours except that it is a residential facility.

Several weeks ago now, Ms Candi got a call from 4-H in Belmopan to see if we would be interested in talking with some other groups about athletic competition. (4-H has a school that serves students like ours in the central part of the country.)  The problem is that some of us do not fit into the categories for the usual athletic competitions.  The primary school competition is limited to students who are 14 and under.  About a quarter of our students turn 15 before the school year is over. The high school competitions would be completely out of our league with our having many students who are 12 or 13 years old. 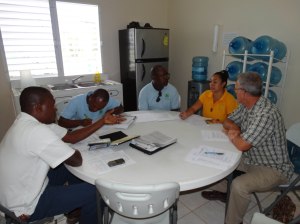 Ms Candi was the only female rep. Cool.

Of course I’m most excited about the track and field competition, and we are thinking ‘pie in the sky’ by hoping that maybe we can compete in the Marion Jones stadium here in the city, which has a world class track.  Ok, so it’s not likely, but you never know until you try.